When To Use Adapters And Converters

An electrical plug converter, as well as schuko plug adapter (or really any kind of adapter),  has very specific uses. So when it comes to using it, you'll need a power adapter supply only in these certain circumstances. That being said, it's still crucial to know. After all, missing out on these items means you won’t be able to use any of your devices or appliances. 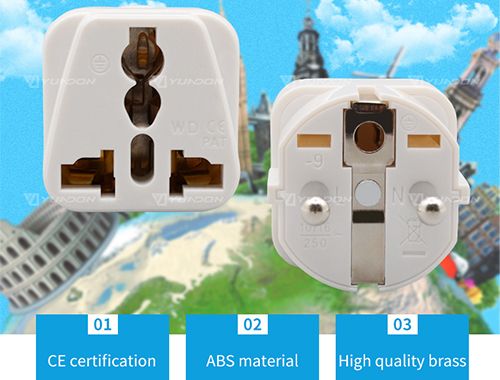 When To Use A Schuko Plug Adapter

One of the first things that many travel bloggers talk about when traveling abroad is the need for an adapter. They talk about the differences in plugs that each country has which means your devices and appliances that don’t fit into those same sockets won’t work.
So you can see already the dangers of not have a power adapter supply at the ready.
But what’s more specific is that you have a schuko plug adapter in certain areas. The reason being that certain countries around the world use what is referred to as the "schuko plug". Among professional's, this is also the Type F plug. Originally, the schuko plug was developed in Germany, however, since then, other countries have adopted this same plug.
Outside of Germany, places like Austria, the Netherlands, Finland, Sweden, Portugal, Norway, Eastern Europe and Spain, are the majority of the countries that use these plugs.
For this reason, if you plan to travel to these areas, a schuko plug adapter will be necessary. Unless you live in those particular areas.

When To Use An Electrical Plug Converter

But sometimes a schuko plug adapter may not be all that you would need in those cases. One facet to a schuko plug adapter (or any plug adapter for that matter) is the fact that the adapter doesn't convert power.
At the end of the day, the adapter you got from your power adapter supply only facilitates you to plug something in when you are traveling to those countries from out of those countries.
So when you plug something in, the socket is still releasing the same amount of voltage as it would normally. Why this is a big deal is not only does each country have their own various plugs, but there is a different amount of voltage that appliances and devices need.
For example countries like the US, Canada, South America and Japan all use smaller amounts of voltage. As such, any products bought and sold there that need power is going to be at their tolerable amount as is. That being 100 volts in Japan and 120 volts in other areas.
So when a traveller from one of those lower-voltage countries uses a schuko power adapter in say Spain - where the voltage is 240 - the appliance is going to overheat, stop functioning properly, and you will more than like smell something burning as the electricity is too much for the device or appliance.
By using an electrical plug converter, you will easily convert the power to ensure that the power the device pulls from that converter is the correct amount.