Basics Of Converters And Power Adapters

In an ideal world, every country has the same type of electricity. This isn't the case as people buy either a US power plug adapter, EU power plug adapter, a UK power plug adapter, and more. On top of that many people are stuck on whether they should be investing in a converter for that matter.
Today we're going to make it easy and look at three places: US, EU, and the UK. From there, we'll be looking at their power as well as sockets and determine what needs to happen to get you power. 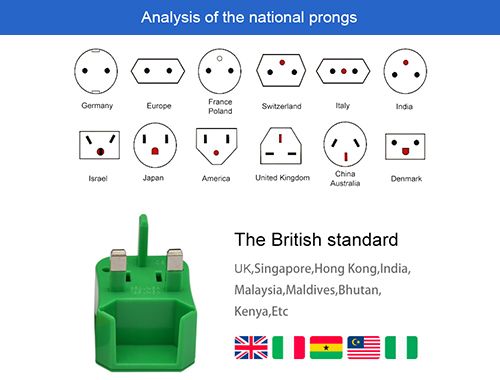 When Use A Converter

Let’s get this one out the way first as it pertains to converters as opposed to a US power plug adapter, EU power plug adapter, or the UK power plug adapter (which is a whole other thing). The idea behind a converter is that it converts voltages. Why this matters we’ll get to in a bit, but converters are needed depending on how much voltage an item can hold.
Generally speaking, converters will be necessary for instances where you have older irons or hair dryers that are single-voltage items. This will be indicated by the fact their max voltage is 100-120V.
These days, products are typically Duel or Multi voltage Dual providing 120V/240V while Multi is a range of 100-240V. Items that fall into that would be newer electrical products as well as our devices.
With all that said converters may be needed in certain circumstances. That depending on where you live and where you are going.

Each country uses different plug sockets, but that alone may not be enough in some cases. For seasoned travelers they may also carry a converter due to the various voltage usages that are going to be needed.
Even though above you may not need a converter in some situations, where you are traveling too may change that answer.
For example, a US power plug adapter can help in providing power to your devices while in the US, Canada, Japan, Caribbean or other locations in Central and South America. That being said, the voltage that those sockets provide are going to be weaker as these sockets provide a maximum voltage of 120. This can cause an issue for those who are using devices or appliances that require a higher voltage. Due to that difference, devices that need higher voltages can still work, however, they won’t work as effectively. Furthermore, it could also damage the appliance in the future due to this.
Conversely, buying an EU power plug adapter or a UK power plug adapter is a good decision but for those out of the country traveling may need a converter. The main reason being is that both the UK the EU, in general, have appliances that need upwards of 240 volts with the minimum being 220 volts.
Of course, this isn’t much of an issue if your appliances need that range in order to function properly which is most of the world barring Central, South, and North America along with a few other places and Japan. That being said, should you use a US power plug adapter, EU power plug adapter, or a UK power plug adapter, and not bring a converter, you may be at risk of damaging your device permanently not to mention creating a burning smell.